I have a love/hate relationship with Walmart.  I love the fact that I can buy almost everything at a reasonable price.  Their mission is, “Saving people money so they can live better.”  That might be a stretch, but they certainly have most everything I need at the very good prices.  I can buy things in bulk a little cheaper, but I have to pay shipping or drive somewhere else to get those bulk items.  I know there are several stores that might provide a better shopping experience, but they almost never beat the prices.  I even buy a lot of my clothes there.  Those bright yellow signs draw me in!

There are a few things that trouble me about Walmart, but maybe they are just personal preferences.  Maybe it’s a personal hang-up I have, but I don’t think people should come shopping in their pajamas – I know, it’s probably a judgement, but I think Jesus is with me on this one!  I have also seen more than my share of butt cracks at Walmart.  I’m not blaming it on the management, but something has gone terribly wrong.  Like I said, it’s a love / hate thing.  I love the greeters — but, sometimes the other employees are a bit negative.  Maybe it’s because of the all of us low-price people demanding excellent service at a low price.  Some days, I can personally irritate even the most initiated–just ask my wife!

You either love Walmart or you hate it – or maybe, most of us just hate that we love it!

The founder of Walmart, Sam Walton eventually sat down and wrote his story, Sam Walton, Made in America.    It was originally published in 1992, but still brings $7.19 at Walmart and I just noticed that Amazon has marked theirs down to match Walmart’s price.  See there, that’s how it works!  In the book, Mr. Walton gives his Rules for Building a Business.  These ten rules are appealing, but I believe the last one, #10, is especially helpful.  It goes like this, “Swim upstream.  Go the other way. Ignore the conventional wisdom. If everybody else is doing it one way, there’s a good chance you can find your niche by going in exactly the opposite direction.“

We notice this in most of the people that have achieved great things – we call them rebellious at first.  Walt Disney built his empire by doing something that had never been done.  Now, millions of people experience great joy because of his determination to swim upstream.  He was willing to ignore conventional wisdom and faithfully continue in the direction of his dream.  Martin Luther King Jr. pursued his dream of equality and non-violence.  I can only imagine that voices of the majority from both sides of the argument urging, threatening and demanding that he leave it alone and just deal with it the way it is.  But, heroes don’t think that way – they swim upstream!  Mahatma Gandhi, Nelson Mandela, and especially, Jesus Christ all ignored the cultural norms of their time and challenged us to progress to greater heights in our civilization, our faith and our walk with people.

Like many others, Jesus defied the “crowd” and pursued the noble idea of a new kingdom.  Satan encouraged him to do what any “normal” person would do and just join the kingdom of this world.  But, Jesus had something different in mind.  The religious people pressured him to go along with tradition and not make waves.  His disciples constantly questioned his mission and purpose on earth.  Jesus went out of his way to use illustrative stories and simple principles to explain his mission, but the crowd did what the crowd always does – it fought ferociously to keep the status quo and preserve the current methods of operation.  Eventually, they would go so far as to kill him.

Often we have dreams that move us forward.  And usually, we realize that worthwhile dreams will not be implemented without resistance and we draw back, delay or abandon even the dreams we think God has invited us into.  After all, if He really wanted us to do them, wouldn’t He make it a bit easier to accomplish?  We never say that – it’s just what we think!

Maybe it would help us to talk about the nature of the opposition just a bit.  I’m not talking about the “adversary” – I’m talking about the crowd.  Sun Tzu, a military strategist, said, “If you know the enemy and know yourself, you need not fear the result of a hundred battles. If you know yourself but not the enemy, for every victory gained you will also suffer a defeat. If you know neither the enemy nor yourself, you will succumb in every battle.”  Jesus taught non-violence but there are many battles that don’t have anything to do with war or physical combat – most battles are in our minds and with the people in our immediate circles – they collectively make up the crowd.

1.  The crowd is usually wrong.  My pastor, Brian Zahnd, says, “The majority is almost always wrong.”  It’s a phrase his father often told him and a good thing for us to remember about those that oppose us.  If the opposition are following conventional wisdom, they are probably wrong even though they will be doggedly committed to their ways.  The Pharisees were quoting Scripture to Jesus but they were still wrong about the application for the current vision Jesus had for the new Kingdom.  As is often said, “you can’t keep doing things the same way and expect different results,”  and, sometimes, it takes new ideas and new methods just to keep things the way they are.

I have made some good decisions in my life, but I often think about the fact that I might have been wrong about many more things than I have been right about.  I don’t regret the journey, but I sometimes regret that I followed the crowd even when I sensed they were wrong – it was just easier.  There is a very real possibility that every worthwhile vision or opportunity will be misunderstood or under appreciated by the crowd – it’s just the reality of things.  Tony A. Gaskins Jr. explained, “Don’t expect people to understand your grind when God didn’t give them your vision.”  It is imperative that we have the courage to walk alone and possibly be right in the end. 2.  The crowd likes to scapegoat.  With the recent shooting, we see the same pattern repeated.  The crowd is not really interested in a purposeful exercise of dreaming, planning and executing lasting change – more often, it wants to find someone to blame and punish them for the things we don’t like.  This has happened since the beginning of time.  Even when we can’t pinpoint the exact problem or the exact person, it makes us all feel a sense of peace if we can come together and put all our “sins” on one person (or goat as it were).  Many believe that Jesus went all the way to death on the cross to once and for all stop this process of scapegoating – but still yet the process continues! 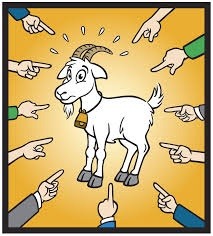 Zahnd, in his book Farewell to Mars, uses the example of kids on a playground.  In this example, we see the two bullies come together because they find a weaker opponent to be the scapegoat and accept the brunt of their frustration.  At Jesus’ crucifixion, Luke observes, “That day Herod and Pilate became friends–before this they had been enemies.”  Brene’ Brown calls it “common enemy intimacy” and reminds us that it’s not true friendship – it’s just an illusion.  Many times, the crowd isn’t pursuing noble dreams or even just morals – more often than not, they are looking for someone to blame.

Some closing thoughts.  It goes without saying that the crowd needs numbers.  People do things in crowds they would never normally do.  That is why sometimes the best thing to do with an opponent is to get close to them.  It’s much harder to hate someone up close.  It’s probably also very helpful to just return to Sam Walton’s rule #10 and realize that anything worthwhile will probably be unliked and unsupported by the crowd.  Proposing something new is a threat to their stability – I say give them some time and don’t wait for approval to proceed in the direction of you dreams.

We should never believe the common myths that “it is as good as it’s very going to get” or “there is nothing we can do” or “one person cannot make a difference.”  All of those things have been proven wrong by marginal or marginalized people that decided they didn’t have to allow the crowd to bully them into inaction.  They continued on – some even gave their lives – and eventually, they left a legacy of hope for all of us.

Jesus, in particular, established a revolutionary Kingdom that demands a response.  Guess what?  The crowd still doesn’t get it!  They’re still trying to preserve the status quo.

Make a decision to pursue the goal you know today!  I dare ya!